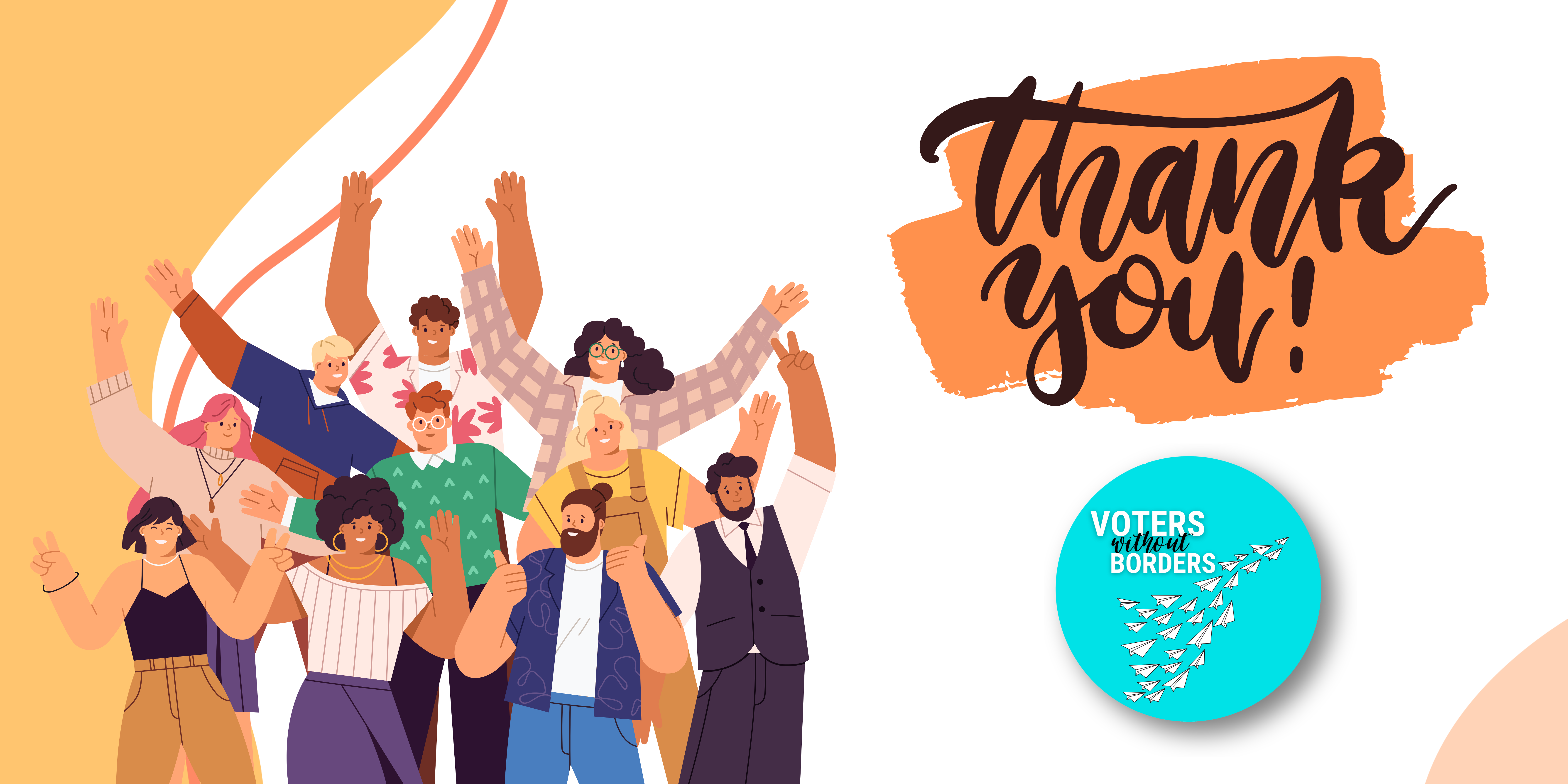 June 11th marks the end of a year and a half journey of advocating, promoting, and supporting European political rights. The Voters Without Borders (VWB) team as well as 8,762 citizens from all EU countries addressed a demand to the EU institutions through an European Citizens’ Initiative (ECI), the participatory democracy tool of the EU; to reach a real European democracy by reinforcing European citizenship. The demand was for full electoral rights for mobile EU citizens as a way to respect and promote universal suffrage.

VWB’s team organised and participated in events, answered Commission reform proposals, presented the ECI at the Parliament, the message of the ECI was part of the European Democracy Action Plan, and the team followed the Conference on the Future of Europe (CoFoE) with great enthusiasm. Indeed, the latter led to the European Parliament’s vote in favour of transnational lists for the European elections. This represents a great step for the future of European democracy. But Europe also needs more transnational voters.

Despite not reaching 1 million signatures, VWB was successful, as it managed to politicise the issues in the ECI. Indeed, the team brought VWB to a higher level of advocacy than most ECIs. This allowed for VWB to be present in European Parliament hearings, participate as experts in the AFCO Committee and in various consultative bodies, and to create a cross-party group of MEPs on European citizenship. The team managed to transform the ECI into a real advocacy tool to raise the issue of voting rights within the EU.

Yet as stated, VWB’s European Citizens’ Initiative did not reach the number of signatures expected, and this failure must be acknowledged, even though support came mainly from the 13.7 million mobile EU citizens. It shows that this instrument needs to be much better known to the general public in order to be workable for a group of young people without the backing of an extensive civil society network and professional PR. This complex ECI also faced special difficulties since most of those who have the right to vote are not sufficiently aware of others being disenfranchised or disaffected, even though in major cities the number of non-nationals can be high. There is also a danger that those who do not have the right to vote because they have practiced their rights to freedom of movement or migration become resigned to their exclusion from political and democratic life and in turn are ignored by political parties. Further efforts will be needed to break this vicious circle and put an end to stains on European democracy being treated as blind spots.

Now the challenge is to use the visibility gained through the ECI campaign to continue to advocate for voting rights. The latter offered several conclusions: first, we received more signatures from citizens who were disenfranchised. Second, countries having large communities in third countries were also our main supporters. Furthermore, the CoFoE outcomes proved that citizens are interested in the topic of democracy. VWB is certain that the ECI is only the beginning of a real reform of European citizenship and these conclusions are the premises of real change.

The change begins now. VWB will continue in a new form. Firstly, there will be two meetings in the Autumn where the follow-up of VWB will be discussed. On 5 October, the ECIT Foundation will organize a meeting of the Cross-Party Group of MEPs on European Citizenship to see whether the initiative can be taken up in the European Parliament. This will be followed on the 31st of October to the 1st of November during the 7th Annual ECIT Foundation Conference, where proposals for a statute on European citizenship will be discussed in a series of panels with politicians, academics and civil society representatives. ECIT foundation needs your support for the future work of VWB, so please feel free to donate, follow ECIT foundation’s social media and subscribe to the monthly newsletter for future updates about VWB and its events.

How your European citizenship will help in another continent: European consular protection

What you may have forgotten about the French municipal elections!