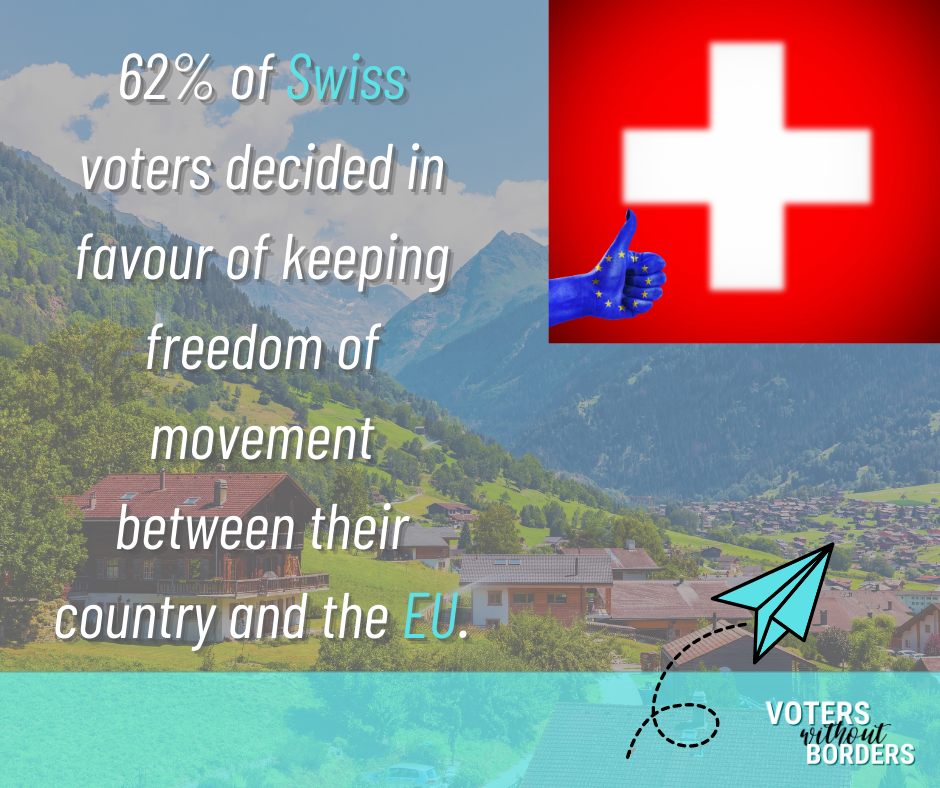 On 27 September 62% of Swiss voters decided in favour of keeping freedom of movement between their country and the EU. This is a welcome result particularly in a period of restrictions on European freedoms for 450,000 Swiss citizens living in EU Member States, 1.4 million EU citizens living in Switzerland and 330,000 frontier workers.

Switzerland is seen as a model of democratic practices when it comes to referendums, as every high-stake political decision is taken by a popular vote, but no democracy is perfect. The question of who can participate in the vote in the first place is often neglected. The referendum on freedom of movement is a reminder that EU citizens who have made use of their European rights and are resident in Switzerland were not allowed to vote on an issue directly affecting their lives. Although the Swiss result was in favour of maintaining the status-quo. However it could well have gone the other way, it is a reminder that the 3 million EU citizens residing in the UK had no right to vote in the 2016 referendum on membership in the EU, leaving them exposed to the consequences of Brexit.

A similar initiative was launched in 2014 by the right-wing populist Swiss people’s party. They proposed to renegotiate the Treaty that lets EU citizens live and work freely in Switzerland and vice versa by limiting immigration through quotas. That referendum surprisingly won 50,3% of the vote in a relatively high turnout of 56%. The Commission stated that this result went against the principle of free movement of people between the EU and Switzerland. It also undermined and breached bilateral agreements between them. This could have triggered a “guillotine clause” , which stipulates that if one agreement is terminated, then the entire body of treaties would be null and void. In the end the Swiss Parliament struck a compromise to allow all immigrants with the promise of work into the country.

The ECIT Foundation has set up a youth-led task force to promote European citizenship, the ECI Voters Without Borders demands full political rights for 14 million EU citizens on the move. The aim is to reform European democracy. It must catch up with the age of increased migration by allowing EU mobile citizens to vote on political matters that directly affect them.

ECIs can be signed by EU citizens living outside EU-27. EU citizens resident in Switzerland could not vote in a referendum on freedom of movement but they can at least make their views heard by signing this ECI (European Citizens’ Initiative).