Voting Rights Campaigns In The EU 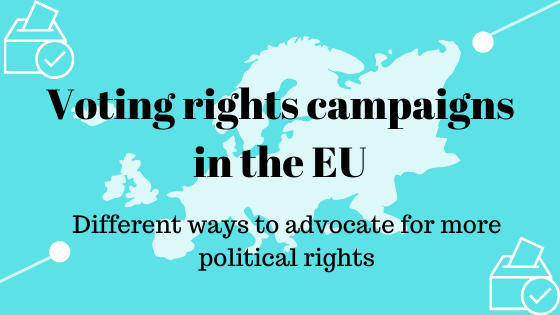 Since 1993, with the Treaty of Maastricht, the rights to vote and stand as a candidate in local and European Parliament elections are granted to European citizens. Despite this great achievement for European Citizenship and equal democratic participation, the registration procedures in the EU Member States are still very different (see the Article XX) and it complicates the access to these rights. But, more importantly, there are two issues that are not resolved at all. First of all, third-country nationals have no rights recognised by the Member States and thus by the European Union to vote and run in elections. Secondly, European citizens are only entitled to vote in local and European Parliament elections, what about the other elections? To tackle these issues, many voting rights campaigns in the EU have been and are still being led. All over the European Union, citizens and politicians are trying to improve voting rights — let us have a look at these diverse proposals and campaigns.

There are three different types of initiatives that we could differentiate. The first one being referendums and petitions (A), the second popular campaigns (B) and the third European Citizens’ Initiatives (C).

A- Referendums and petitions in favour of electoral rights

Luxembourg has approximately 50% of non-citizens resident in its population. This is why the question of giving them electoral rights is ubiquitous in the national discussion. Sovereignty is very important in Luxembourg, but there were still campaigns to try to implement these reforms. In 2015, a constitutional referendum asked Luxembourgers if they were in favour of:

The referendum was rejected by 78% of the voters.

Five years later, in 2020, an official petition was launched (Petition 1481), calling for full political rights for EU citizens only, and collected 212 signatures.

B- The popular campaigns in favour of the electoral rights

In Austria, a beautiful initiative in favour of voting rights has been led since 2009. Its name is Pass Egal Wahl. The concept is to hold symbolic elections where all Austrian residents can vote whether they have Austrian nationality or not. The 2019 edition gathered 2.900 supporters.

Another campaign has been led in Germany since the 2019’s European Parliament elections. Its name is “We vote – I live here I vote here”. The concept is to invite people with immigrant backgrounds to use their right to vote and, as Pass Egal Wahl is doing in Austria, to organise symbolic elections for those who do not have the right to vote.

In the United Kingdom, after Brexit, 3 million European citizens living there were deprived of the electoral rights they had before. For the #LetUsVote campaign, led by The 3 Million, these rights should have been maintained. This campaign exists since the referendum was held in 2016. Unfortunately, despite the promises that the “Leave” campaign made, the European citizens were indeed deprived of these rights in January 2020.

In Malta, in 2018, Equality Minister Helena Dalli tried to give electoral rights to third-country nationals in local elections but this request was unfortunately turned down by the Prime Minister.

In Southern Italy a symbolic election was held in Bari, in 2019. It gave non-citizen residents a symbolic right to vote, as in Austria and Germany. This initiative was led by CGIL, Arci and Caps.

In France, a campaign was led by the “J’y suis j’y vote” group. This group gathers many organisations, such as La ligue des droits de l’Homme. For example, during the 2019 municipal elections in France, they planned symbolic elections, as the others did but also to do voting where they asked people to give their opinion on giving the right to vote to non-citizen residents.

In Spain, a campaign called Votar es un derecho was launched in 2019 to ask for electoral rights for all migrants. The concept was to give migrants a right to vote by way of “using” the vote of abstentionists.

People who didn’t feel represented or didn’t want to vote for other reasons, could instead accompany and cast their vote for the people with no voting rights. This way, non-citizen residents had a say in the elections.

In 2013 a European Citizens’ Initiative (ECI) called Let Me Vote was led by Philippe Cayla, from France. This ECI was calling for extension of the electoral rights already given to European citizens. It aimed to give them full political rights. Unfortunately, it did not gather the necessary one million signatures.

In 2020, a pretty similar ECI was launched by ECIT Foundation. Its name is Voters Without Borders and it demands the same things as Let Me Vote, adding a reinforcement of the already existing rights and a call for more research when it comes to mobile EU citizens. This campaign is still ongoing. Read about our proposal here.