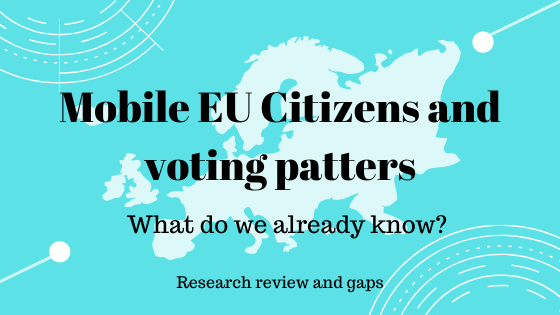 This article aims at presenting and reviewing research already conducted on the topic of mobile EU citizens and voting patterns. Here, the focus will be primarily on the definition of different kinds of voter groups among EU citizens resident in another EU Member State, the likelihood of voting and political integration in the country of residence, or continued attachment with the country of origin, and how Europeans feel about European universal suffrage. In conclusion, the article will give some recommendations for gathering data and future possible research designs.

A small collection of interesting articles

In 2018, Kantar Public consulted 27,474 citizens in a Eurobarometer survey. One of the questions was if they would rather vote in their country of residence or in their country of origin for the European Parliament Elections. The results were that 56% would like to vote in the country of residence, and 26% in the country of origin. Another relevant question was on the topic of voting rights when living abroad. Over 74% of EU mobile citizens see maintaining the right to vote when living abroad as an important issue. (Kantar Public, 09, 2018) 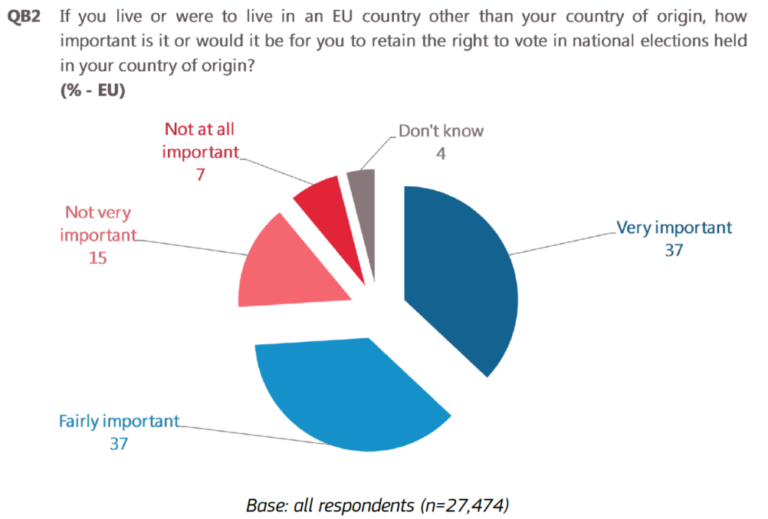 In 2010, Kantar carried out another survey. At this time, they asked two questions that are most interesting for our ECI “Voters Without Borders”. These questions were: “Should EU citizens living in another Member State have the right to vote and to stand as a candidate in regional elections and or national elections?” For national elections 50% was for this statement, 43% against, 7% did not know. The regional level was viewed slightly differently — 54% were in favour of including mobile EU citizens, 39% against it, and 7% did not know (Flash Eurobarometer, 10, 2010, p.11). While these questions are relevant, it would be even more interesting to know how people feel about this now. An update of this survey would give us new insights into this topic. 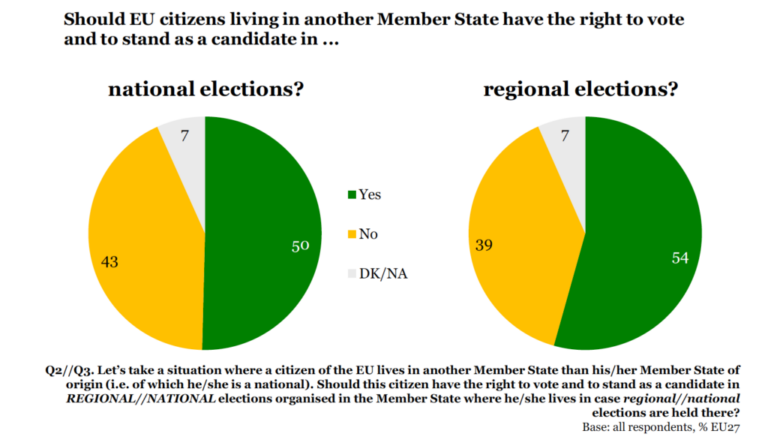 Arrighi and Bauböck (2017) carried out research on how voting rights affected the mobility of citizens. They concluded that at the national level voting rights should be linked to the principle of citizenship, and at local level to residency. This could be a logical solution to voting rights in a globalized world, but EU citizenship should mean that people can move freely without having to go through the process of naturalization to maintain the right to vote in their country of residence.

Whilst the numbers of EU citizens living in another Member State has increased, cross-border voting has not. EU citizens participate less than their national counterparts — André, Dronkers, & Need (2014) have conducted a study of Finnish emigrants about their voting behavior and found some interesting results about participating in national and regional elections. The longer emigrants were away from their home country, the less likely they would vote in the Finnish national election. The threshold of this indication was that after 10 years, Finnish emigrants would show this behavior.

Hutchinson and Russo (2019) analysed the likelihood of voting in European Parliament elections and municipal elections by European mobile citizens. Here they researched 7 cases of countries, which they divided into 3 categories. Old Member States (Belgium, Luxembourg and Spain), Nordic Member States (Denmark, Norway and Sweden), and a New Member State (Cyprus). The likelihood of EU mobile citizens to vote depended on several factors. First, countries where non-nationals citizens are automatically registered have a higher turnout rate than countries that do not have such policies. Secondly, different nationalities affect the voter turnout rate. New Member States have a lower voter turnout rate than older Member States. The longer people live in another EU country, the more likely they will participate in the election of the country of residence. Third, when EU mobile citizens have acquired the citizenship in the country where they reside, they will tend to vote more often. Fourth, geographical clusters such as border regions and cities have a higher impact on the EU mobile citizens’ participation. The reason why they could not include certain countries in their analysis was because the national statistics bureau made no distinction between EU mobile citizens and third-country nationals.

To summarize, what do we already know? First, we know that voting has become something transnational. Second, the likelihood of voting across borders depends on several factors. Structural incentives such as automatic registration in the election register or the acquisition of citizenship are important. There are also geographical causes that could influence the likelihood of transnational voting, such as,  mobile EU citizens residing from an old Member State, or when you live in areas where there is a high concentration of mobile EU citizens, in border areas or cities (André, Dronkers, & Need, 2014) (Arrighi & Bauböck, 2017) (Hutchinson & Russo, 06-2019). We also know that about half of the general EU population asked in 2010 feels that EU mobile citizens should maintain the right to vote in national elections (Flash Eurobarometer, 10, 2010). Also, around the same percentage of EU mobile citizens would like to vote in the country of residence for European Parliament and local elections. Lastly, around three-quarters of Europeans feel that European mobile citizens should maintain the right to vote in national elections (Kantar Public, 09, 2018).

Now that some of the research available has been summarised, some suggestions will be provided on the basis of information not yet available. I will divide this in two topics, gathering information and research recommendations.

On the topic of information availability. Hutchinson and Russo (ibid) stressed that they could not find information in certain Member States about EU mobile citizens, because these Member States made no distinction in selecting between EU mobile citizens and third country nationals. Hence, for future election reports, it would be helpful to make a distinction between these groups.

As a P.S. to all this, it is often claimed that 17 million EU citizens reside in another Member State and that the number has doubled in the last ten years. That does not take into account the impact of BREXIT after the current year of transition let alone the possible impact of COVID-19.

Lastly, this is a small request for some help from the community. If someone knows about scientific articles, books, or reports already done on this topic of mobile EU citizens and voting patterns, could you please share them with us? This can make our ECI more successful. Thank you in advance!

André, S., Dronkers, J., & Need, A. (2014). To Vote or Not to Vote? A Macro Perspective. Electoral Participation by Immigrants from Different Countries of Origin in 24 European Countries of Destination. Research on Finnish Society, 7-21.