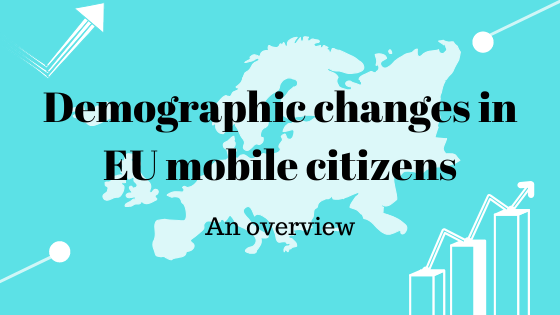 Our ECI tackles the disenfranchisement of EU mobile citizens who aim to exercise their political rights to vote in their country of residence or their country of origin. This article takes a closer look at recent demographic changes in EU mobile citizens (EUMCs). Freedom of movement and freedom of residence in another Member State is protected by directive 2004/38 of the European Commission. At the same time, the EU promotes and sustains this principle by setting up programs such as the Erasmus program, the European volunteer service, and the European solidarity corps. These initiatives are just some of the factors why there is an increased rate of cross-border mobility. Therefore, the ECI is not only fighting for European political rights, but it is also enhancing the democratic principle that European citizens should have the opportunity to express themselves politically wherever they reside and pay taxes. The more the number grows, the more the outcome of this underrepresentation will result in a democratic disaster. Demographically, the gap is already quite big.

To verify this, we have consulted the database of EUROSTAT where researchers differentiate between nationals, EU Mobile Citizens (EUMCs), and Third-Country Nationals. Here, we have aggregated the results of each year and divided the number of these EUMCs by the number of the total population.

Since 2009, the number of EUMCs has increased from 2,64 to 3,48% of the total EU population, as shown in figure 1. In absolute numbers, this percentage is even more staggering. In 2009, the total EU28 mobile citizens population was 11,6 million citizens. This rose to almost far over 17,8 million in 2019, a difference of almost 6,2 million citizens. As the growth rate per ten years, the number of citizens between the entire EU population and EU mobile citizens also is different. The total EU population grew the last ten years with 0,23%. whereas the EUMCs had a growth rate of 4,36%. 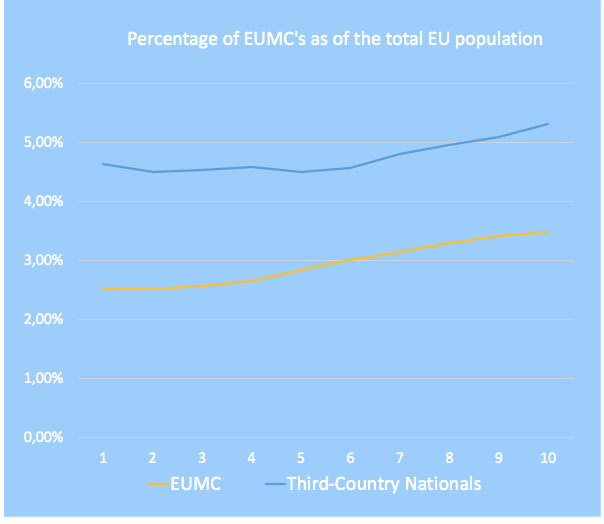 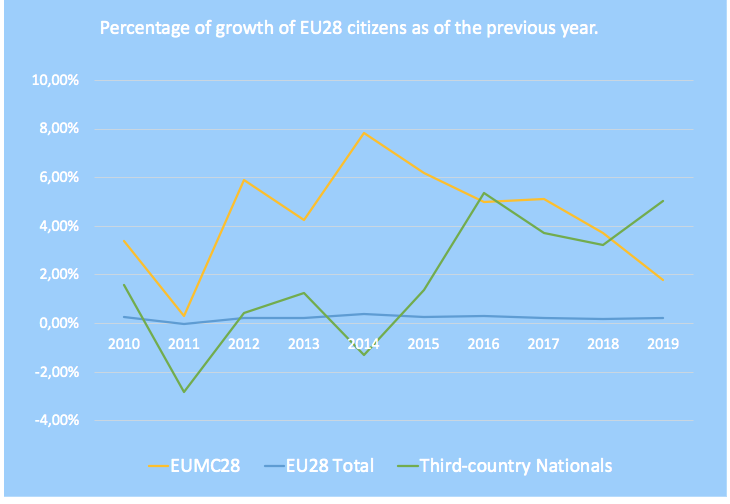 Cyprus and Luxembourg have both the highest percentage of EUMCs, with 13,45% for the former and 43,8% for the latter. On the other side of the spectrum, there are countries such as Bulgaria with 0,08% and Poland with 0,2% of EUMCs. Large countries such as France, Italy, Spain and Germany also have interesting numbers. France 2,39%, Germany 5,28%, France 4,19%, Italy 2,62 %, and the UK 5,52%. The number of citizens abroad as of 2019 also shows some interesting results, Romanians, Lithuanians and Croatians have the lowest percentage of their total population living abroad. Whereas the UK, France and Germany have the lowest percentage of EUMCs, as shown in figure 5. 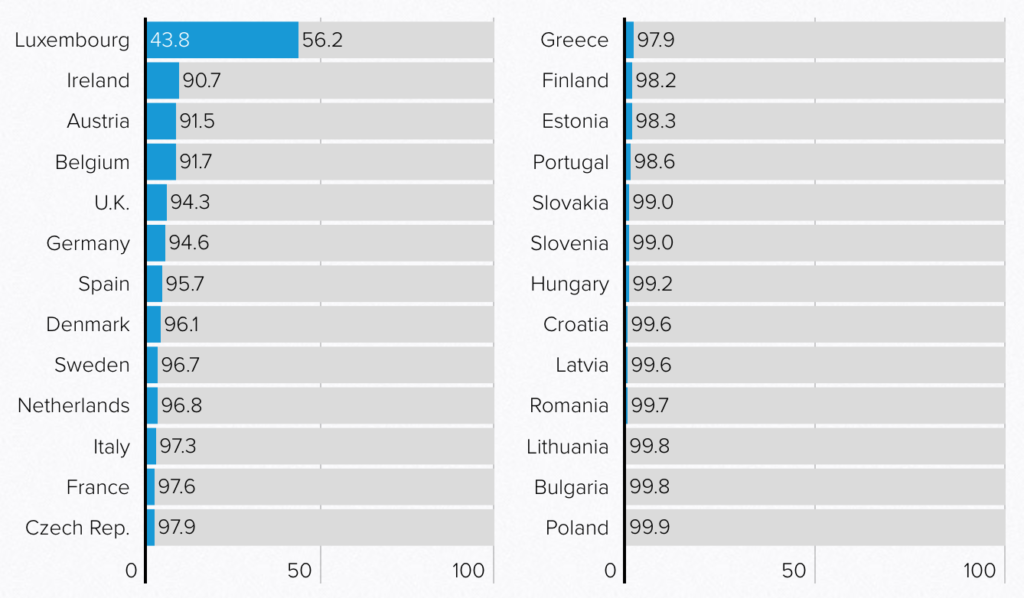 Figure 3: Number of EUMCs residing in another EU country 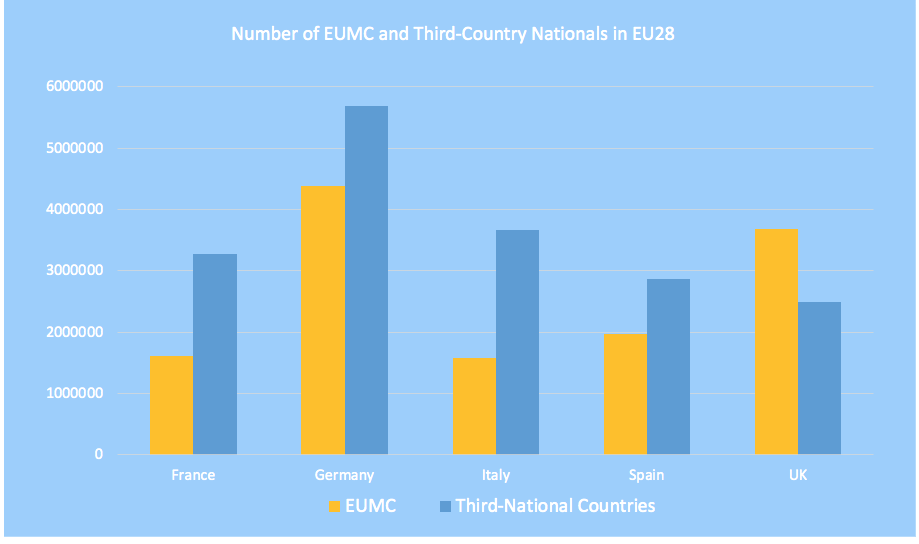 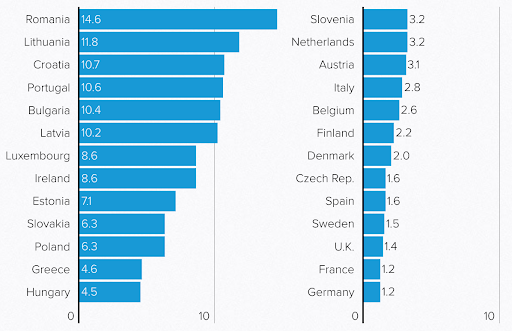 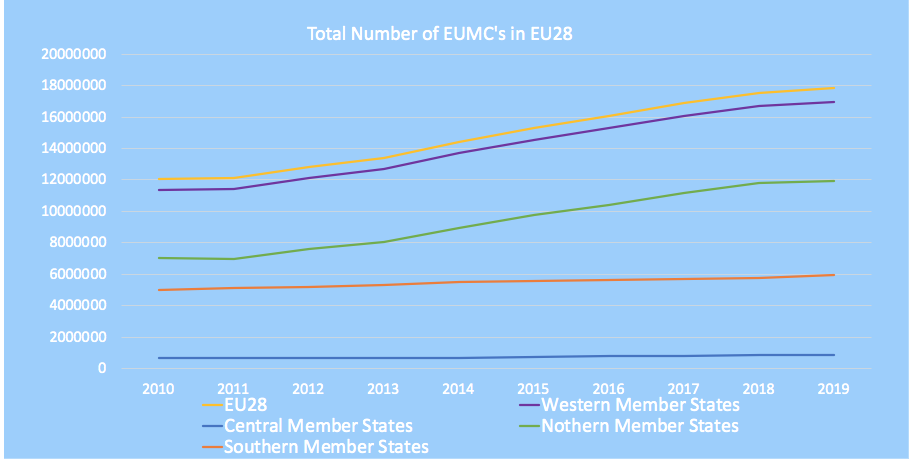 When these numbers are compared to other third-country nationals, one can also observe an intriguing result. This group is larger than the EUMCs with over 23,4 million citizens. However, here the North-South division is equally divided with over approximately 11 million each,  the West-Central division is not equally divided. Western Europe has over 21,3 million Non-European citizens within its borders and Eastern Europe has over 2,1 million. The average growth rate in percentage across ten years is 1,89%.

There is a clear indication that the number of EUMCs and third-country nationals is increasing. In some large Member States, the population of EUMCs and non-Member State citizens consist of almost a small/medium-sized country. As both of these groups are expanding more rapidly than the total EU population, it is paramount that something needs to be done in terms of political rights. The European Commission shares this point of view. In the EU Citizenship Report 2017, the Commission wrote that: “European citizens should not be discouraged by the right to vote as a result of exercising their right of freedom of movement as stated in directive 2004/38”.

In conclusion, as more EU citizens will travel and work abroad and make use of the Erasmus program, European volunteer service, and European solidarity corps, the number of EUMCs will only increase and it will increase more rapidly than the total European population. As EUMCs lack any political representation in their tax paying residence, their political rights continue to be ignored. Therefore expanding their political rights is the only logical step forward.